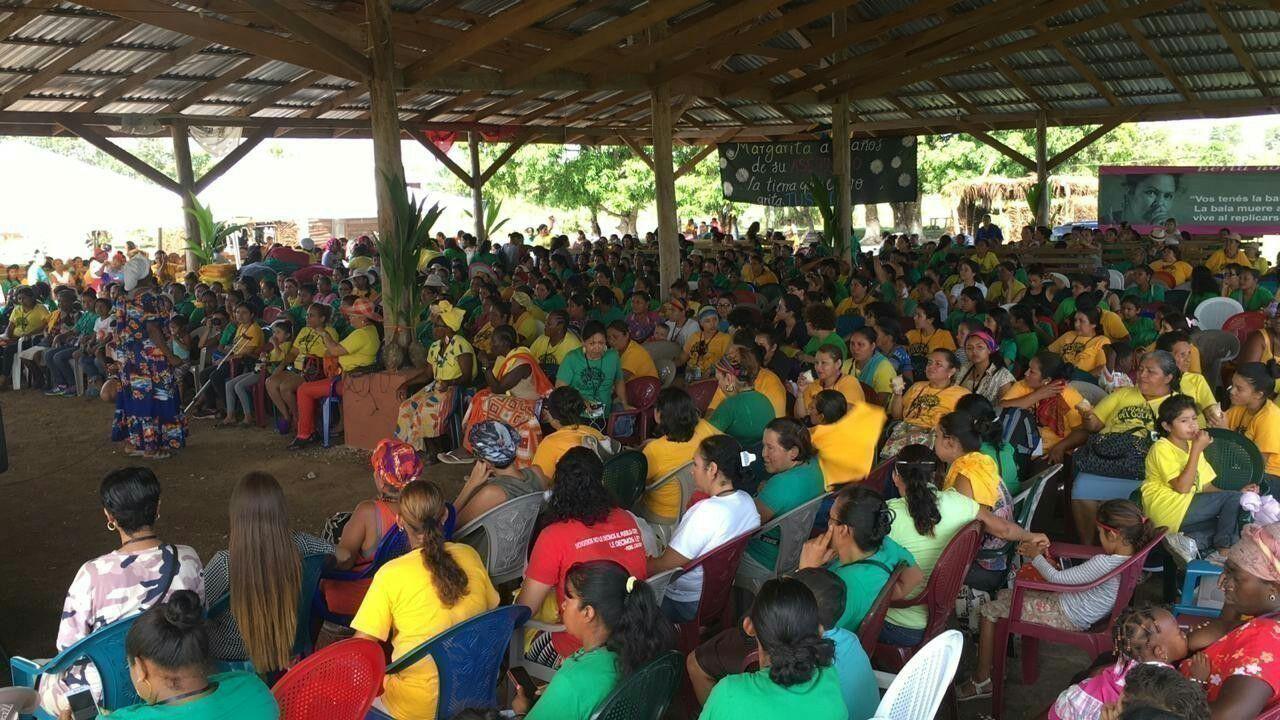 In the rebel Garífuna territory of Vallecito, Iriona, Colón, Honduras, surrounded by elements of nature that nourish life and hope, 1,200 women and approximately 350 children gathered and embraced each other with life and words, arriving from Choluteca, El Paraíso, Copan, Olancho, Valle, Francisco Morazán, Gracias a Dios, Colón, Yoro, Cortes, Atlántida, Intibucá, Lempira, La Paz, Comayagua, and Santa Bárbara.We felt ancestors Margarita Murillo, María Enriqueta Matute, Berta Cáceres, Magdalena Morales and aunt Macucu with us in all of our actions as spirit, as thought and as strength. We felt the energies of our peoples, of the Tolupán, Lenca, Misquito, Garífuna, Pech, Maya Chortí and all other peoples in struggle, coming together after ten years of the coup d’état and the resistance of the Honduran people, of the women of Honduras.The gathering salutes the strength and rebelliousness of women, those present, those who could not come, and those who are no longer physically with us. Despite the wounds and pains from violence and oppression visited upon our bodies, territories and organizing processes, we have enormous conviction and dedication to continue thinking, creating and acting together.The strength of the worldview of indigenous peoples was present and manifested through spirituality, wisdom, experiences of resistance and forms of relating to nature and life. Through debate and conversations during meals, breaks, and work, we assembled these words, which we now share.

The coup d’état transformed into a dictatorship and continues to deepen the extractive model that threatens the livelihood of women and indigenous peoples. This is a regime that plunders the common good, identities, bodies, wisdom, spirituality; that is sustained by corruption, impunity, drug trafficking, militarization, persecution, criminalization of our sisters who struggle throughout the territories of Honduras.We are living through an humanitarian crisis produced by that plunder, which cruelly and clearly creates the migrant exodus by our sisters and brothers, an exodus which empties our territories, with disastrous results for our people and the community social fabric, benefiting the extractive projects that have less and less opposition to confront.We call upon all of us to respond to the urgent necessity of reclaiming and multiplying autonomous practices and envisioning sovereign alternatives that are anti-patriarchal, anti-racist, inclusive and diverse, due to the evident failure of masculine exercise of power based on the colonial electoral democratic model, which threatens women and indigenous peoples.

The increasing normalization violence against the bodies of women worries us. Our bodies become a territory for the expression of machista and hetero-patriarchal culture and frustration, often perpetrated by men from the social movements and exacerbated by the increase in militarization and religious fundamentalism. The role of women in the struggle has been at once set back and strengthened, with better political clarity, wisdom, ability to mobilize and inspire in diverse struggles where we have been putting forth our thought, voice, bodies and action. No violence will hold us back.From this gathering, we commit ourselves to continue coming together in collective rebellion, to embody each other’s struggles and to envision a Honduras without dictatorship, with autonomy and sovereignty for the people, for women.After 10 years of the coup, we continue to struggle together.For a Honduras without dictatorship.Vallecito, Iriona, Colón, Honduras, June 29th, 2019